< Back to all alumnae spotlights 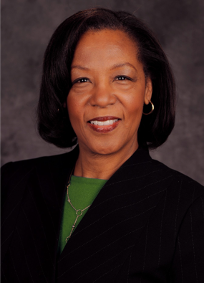 What did you value most during your time with HERS?

My time spent at the HERS Institute was during the early period of my first key administrative role as an Associate Dean. I had the opportunity to interact with women from outside of academic affairs. This was the beginning of my schooling on how best to work with staff in student affairs, business and finance. At that time, I tracked my career to the Provost/Vice President level, but what I valued most was the sisterhood, the opportunity to interact and also build professional relationships with emerging women leaders. There was no judgement—only support and encouragement.

How was the HERS experience different than other leadership development organizations you’ve participated in?

Most of my leadership development experiences were specific to the rank (deans, provost, etc.), whereas HERS brought women in various roles together from across their respective institutions. But the real strength of the HERS Network is its ongoing support for our professional development and success. During my time at the HERS Institute, Judith White (former HERS president) made a commitment to stay in touch and reconnect with alumnae as we attended various annual meetings.

The HERS Network is further strengthened when campuses like Grand Valley State University, Eastern Michigan University, Indiana University South Bend and others commit to sending women each year. As institutions that contributed to my success, and because of their commitment, I was always part of a cadre of HERS alumnae on campus who continued to pay it forward and advance other women leaders.

How did HERS pique your interest to work toward a presidential role at an institution?

As I said earlier, I tracked my career to the Provost/Vice President/Executive Vice Chancellor level at HERS. In a cabinet level position, I became more engaged as a campus leader while working beside my Chancellor—and on many occasions, I stepped into the role during his absences. Sometimes, we have to see something up close to internalize what many have told us we could or should do. Recognizing that I should serve as an institution leader, I became deliberate in my learning, experience and professional development to ensure that I was best prepared when the opportunity arose.

What advice would you give to a woman in higher education who wants to advance their career?

Do the job you have now at 100%. Learn as much as you can, seek mentors and be a mentor for others. Focus on advancing and supporting the people you are called to lead. Be prepared and when opportunity knocks say “yes” and go forth. If you demonstrate that you add value or are able to lead in your existing role, you will be asked or nominated to serve at the top level. Give it time, don’t try to skip too many steps. This is a marathon.

Also remember that women everywhere are invested in your success and are standing in the wings cheering for you.